As a dessert girl, my journey in New York was full of expectations and I was very excited to try cupcakes, donughts, carrot cakes, cookies.. and more particularly the original New York Cheesecake.

Eileen’s Special cheesecake and Junior’s were on top of my list. Eileen’s opened in Lower Manhattan in 1974, and both are a landmark in the New York pastry scene. It is a little place selling this unique treat in different flavors. Trying the plain one is always the best introduction before having the others. The size of the cheesecake is the same as a cupcake and I found that the main layer was dense, creamy and very rich. I was full just after the plain one. Being used to eat cheesecake in France with a crunchy base, I found that this Graham cracker base was maybe too soft. New Yorkers seem to appreciate it, because there is always a queue outside. 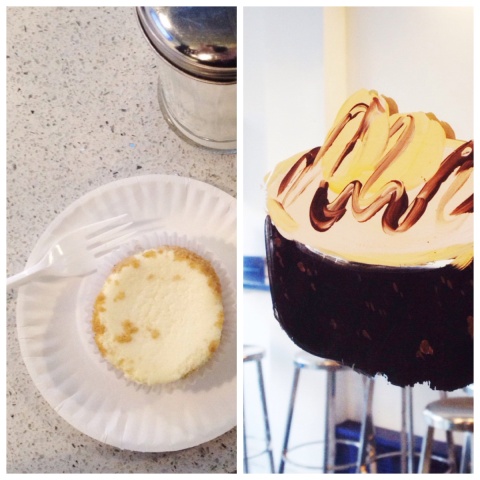 Junior’s is a very popular dinner in Brooklyn and exists since 1950. They serve breakfast to dinner and this is exactly the kind of place you see in the American movies. The cheesecake appeared on their menu in the 1960’s. At the entrance, you will have a quick look at the take away boutique where different flavors of cheesecakes are proposed. The portions looked very big, my friend and I shared a plain one for two. It was very dense and creamier than at Eileen’s. Barack Obama and New York mayor Bill de Blasio were recently spotted here. (Photo credits: NYpost.com) 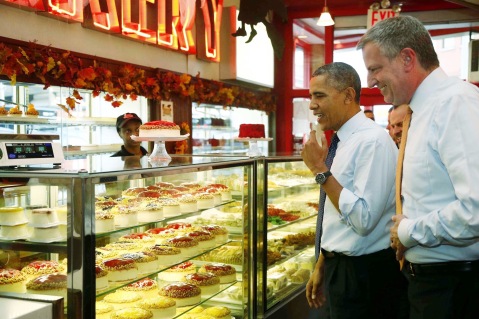 If you are in New York, I would say Junior’s is definitely the place you should go for tasting the original cheesecake. I loved the pictures of celebrities hanging just above our head, the attentive service and the warm atmosphere of the restaurant.